Networks have become ubiquitous in systems biology and visualization is a crucial component in their analysis. In this blog post I am going explore the power of simulated annealing algorithm in laying out PPINs. The algorithm is named after annealing in metallurgy, a technique that involves heating a material above its recrystallization temperature, maintaining a suitable temperature, and then cooling. The Simulated Annealing (SA) algorithm represents the space of the visualization problem as a set of layouts (states) each one with associated energy, and it tries to find the layout (state) with minimum energy (i.e. below a threshold) that represents a potential network layout.

The associated energy function can be used to optimize any graph drawing constraint. For example, a common constraint is to decrease the number of edge crossings. Davidson and Harel incorporated the following constraints to draw graphs “nicely”.

But these constraints do not cause the resultant layout to mimic the underlying biological knowledge. For instance, in a PPIN where a node represents a protein and an edge represents an interaction or control relationship between two proteins, it may be important for a layout to reflect the locations of the proteins within the cell, or the communication of a signal from the exterior of a cell to its nucleus. In this blog, I am going to explore the following constraints which mimic the underlying biological knowledge.

These constraints capture the intrinsic biological meaning of the networks. Receptor proteins that are located on the cell membrane, whose function is to sense the presence of the specific signals in the cell’s environment. When a receptor senses such a signal, it communicates the information to the interior the cell via interactions with other nodes in the network. Ultimately, the signal reaches proteins called transcription factors, which move to the cell’s nucleus to carry out its response to the signal. These constraints utimately seek to convey the flow of information from the cell membrane to the nucleus.

Going ahead, for the purpose of demo, I have used the Cytoscape layout extension - cytoscape.js-simulated-annealing to apply simulated annealing on a given graph. The library allows us to include user defined energy functions and other useful customizations.

In the rest of the blog I will provide a series of examples to demonstrate how simulated annealing can be used to mimic biological constraints mentioned above. First I will give a typical example of nicely drawn graph showcased by Davidson and Harel. For the purpose of demostration, I have used a small synthetic network where triangle nodes reperesent receptors, rectangle nodes represent transcription factors and ellipses represent intermediary nodes. 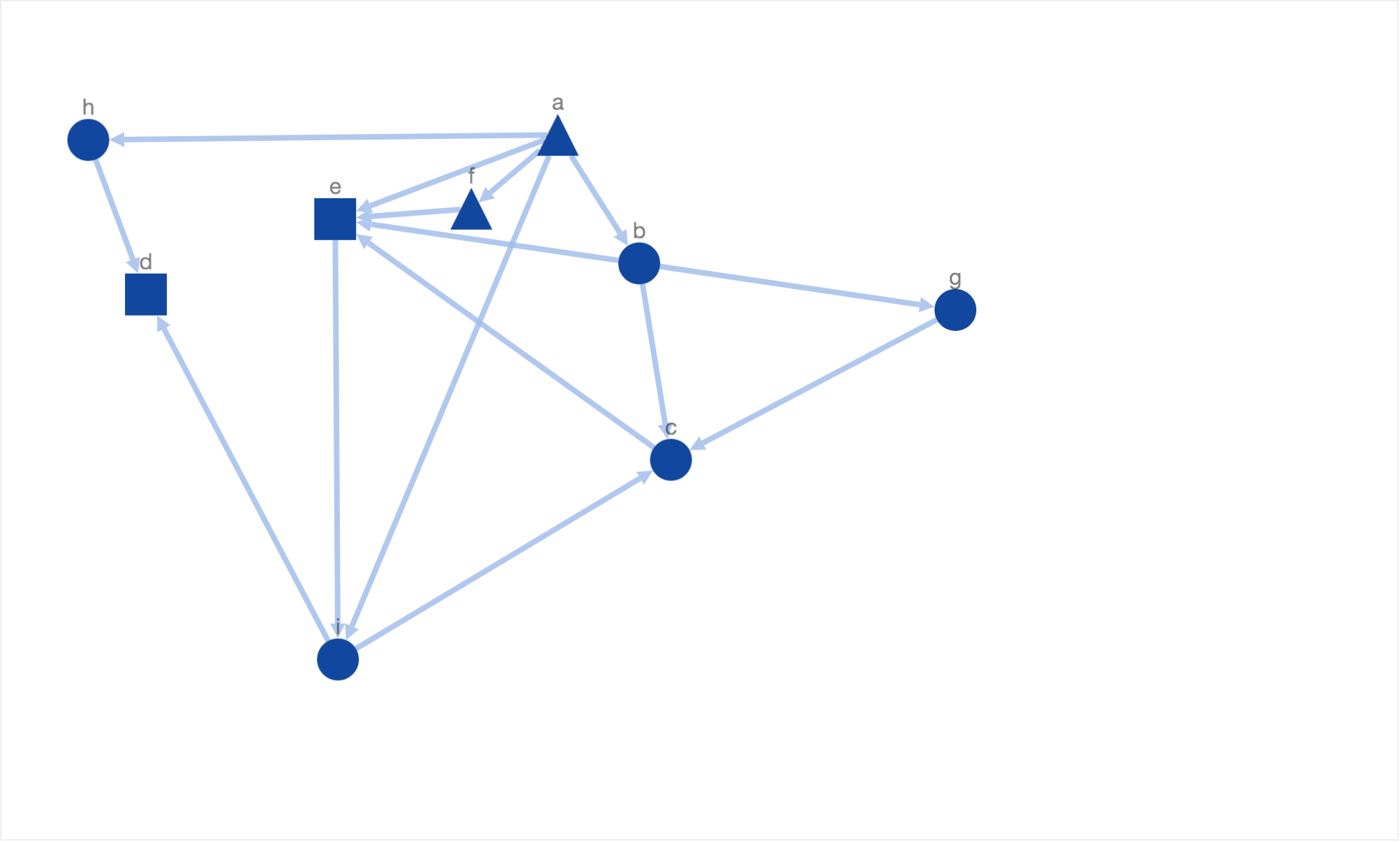 This layout showcases all of the 5 properties of a nice layout defined by Davidson and Harel. Although the layout is readable, it doesnt mimic or represent the underlying biological knowledge. For example, there is no clear organization of nodes. The receptors and transcription factors are laid out on same level/height. It is also unclear if the information flow started at intermediary protein node ‘a’ or receptor node ‘h’. There is no consistent sense of direction for information flow as well. The information flow from node ‘h’ to node ‘d’ goes from top to bottom in contrast to bottom to top information flow from node ‘i’ to node ‘d’. Therefore, due to the lack of meaningful placement of nodes, the layout is not biologically informative. Inadvertently, the reader has to carefully traverse the graph to understand the flow of information from the cell membrane to the nucleus.

One of the first things we want to do is associate locations to start and end of information flow. To be specific, we want the flow in our layout to start at the top and flow toward the bottom. This requirement can be translated as - “Arrange the receptors at the top” and “Arrange the transcription factors at the bottom”. Given the constraint, we added a new energy function defined as following:

where ti, bj stand for the distance between receptor i and the top border and transcription factor j and bottom border respectively. This way the nodes are prevented from getting too far from the respective borderlines. Clearly, the energy function increases if the receptors (triangles) are moved away from top border and transcription factors (rectangles) from bottom border respectively. In order to avoid nodes being moved beyond the borderlines, we set the energy function to a very high value (10i) if the nodes were to be moved beyond top or bottom border. Once we introduced this energy function we were able to see the following resultant layout. 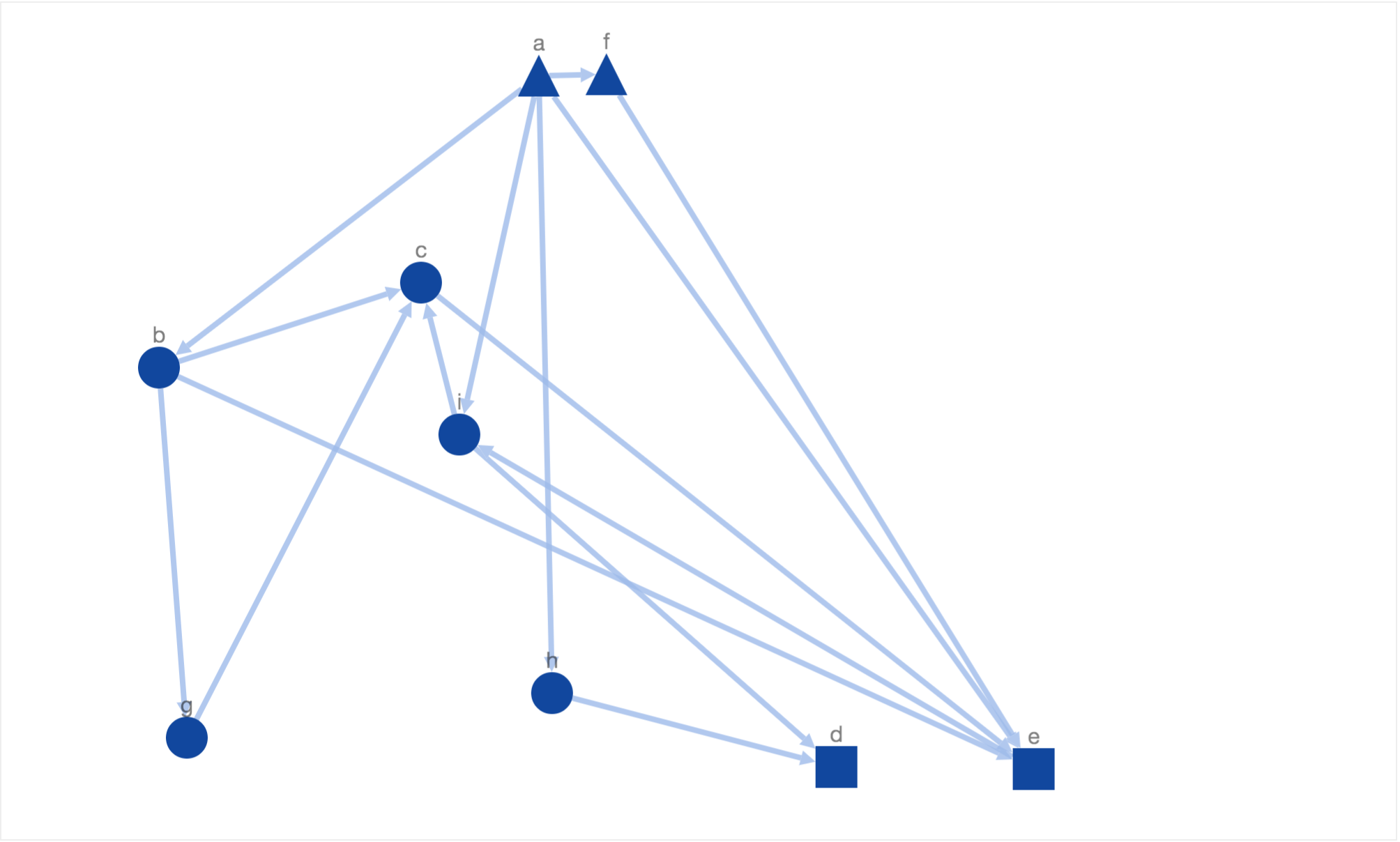 In this layout, simulated annealing has optimized the new constraint of moving receptors (triangles) to the top and transcription factors (rectangles) to the bottom along with the 5 properties of a nice layout defined by Davidson and Harel. Due to the introduction of above mentioned constraint, the generated solutions are more biologically meaningful. It is now easier to identify the start and end of information flow without even going through the entire network flow. But at the same time it very hard to discern the sequence of information flow from the placement of intermediary nodes (ellipses). For example, the node ‘c’ is placed above node ‘g’ and ‘b’ when the actual sequence of information flow is a->b->g->c->e. 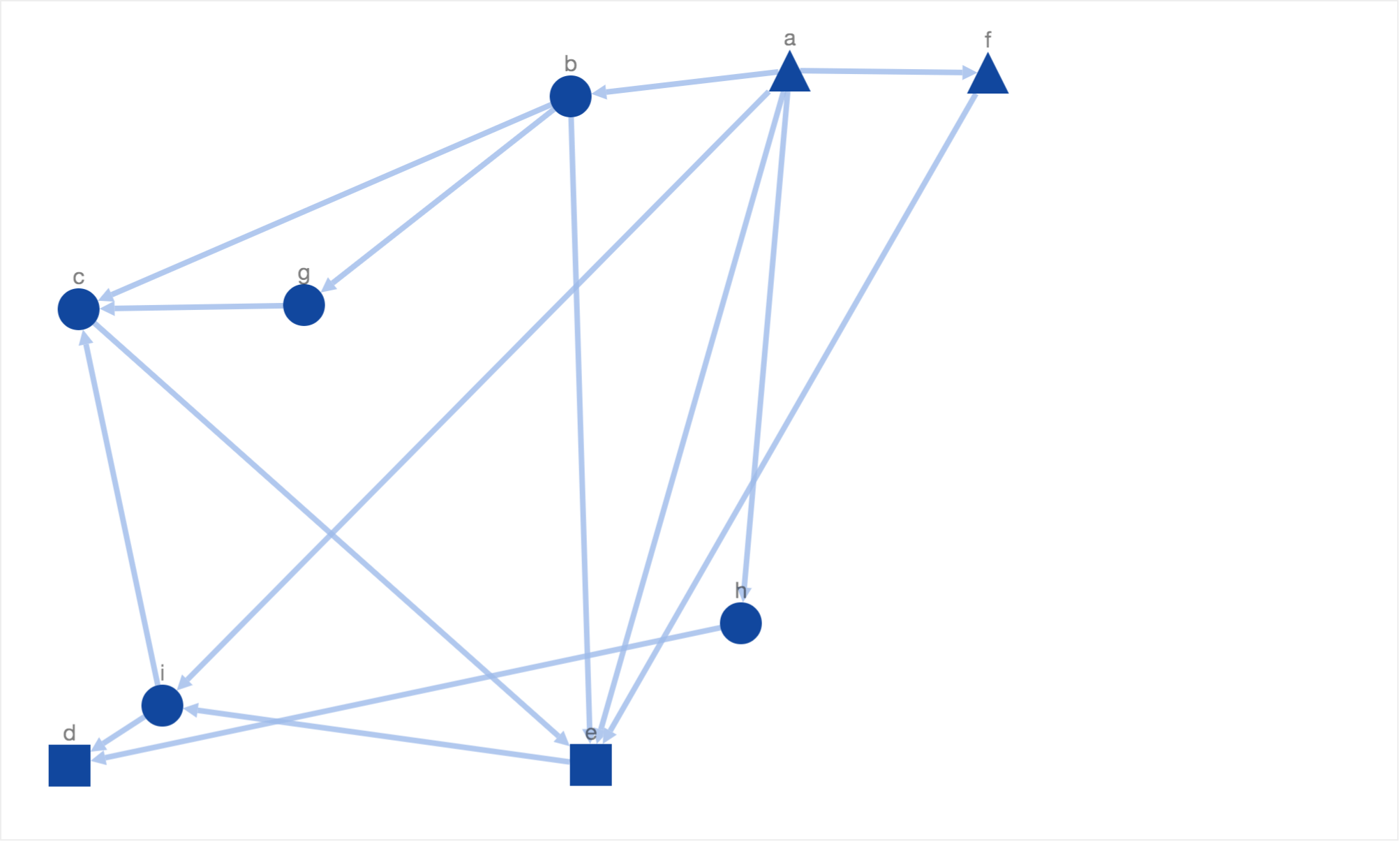 In this solution, we have got more downward pointing paths than the previous solutions. But there few shortcomings. Firstly, the intermediary protein nodes are arranged far from each other. Sometimes in biological networks, one would want to arrange similar nodes (e.g. isoforms) closer. In order to satisfy this constraint, we added an energy function which returns a high value if similar nodes (same shape or color) are placed far from each other. The function is defined as following:

where SameShape(u,v) returns 1 if the u and v have same shape, otherwise 0 and dist(u,v) returns euclidean distance between u and v. After including the above energy function we were able to get the following solution (layout). 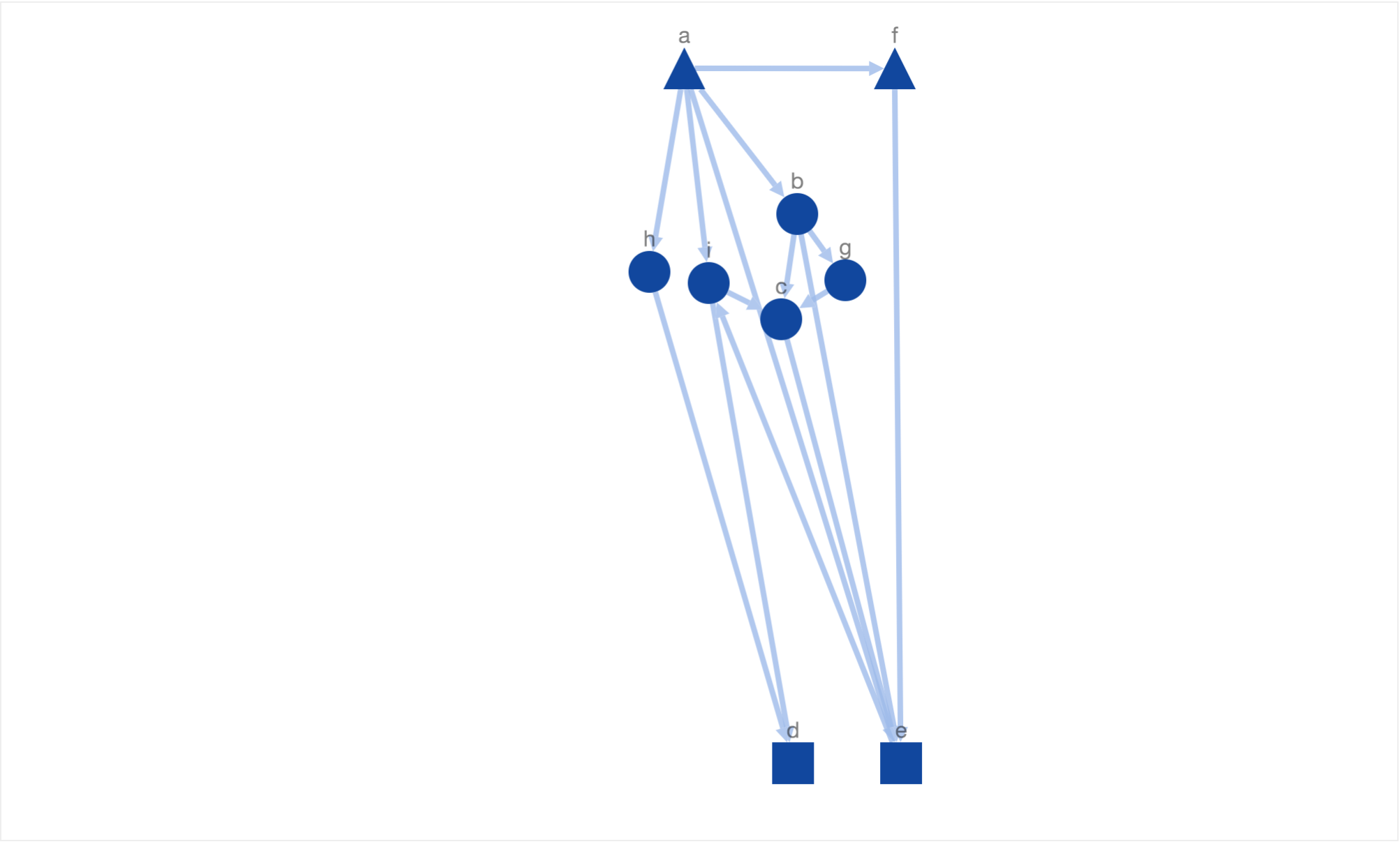 In this layout, we have not only reached the maximum number of downward pointing paths but also arranged similar nodes closer to each other. Finally, this layout satisfies the three biological constraints defined earliar in this blog.

After including the above given energy function, simulated annealing generated the following layout. 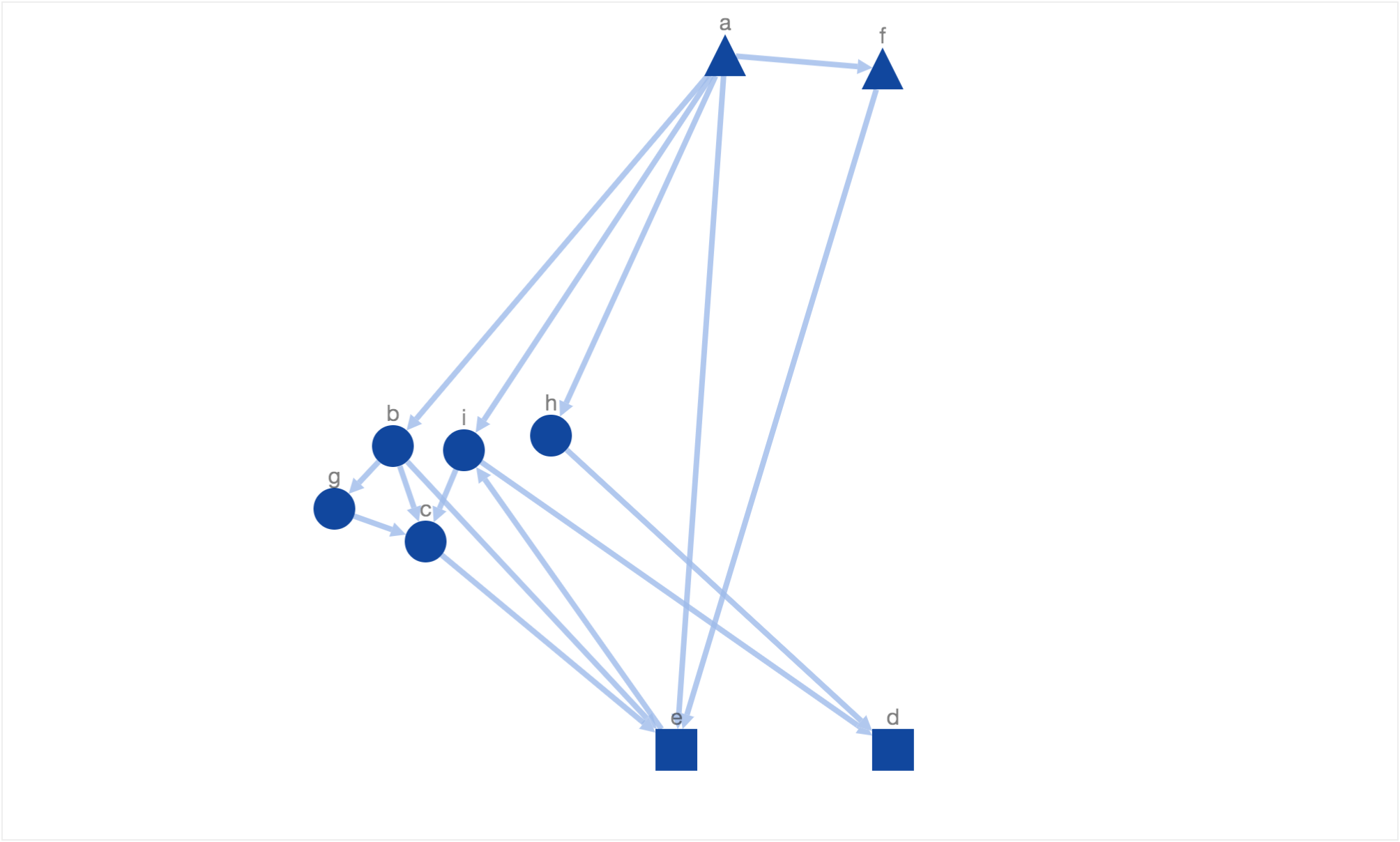 This doest look like what we would have wanted! The directed edge from node ‘a’ to ‘f’ doesnt look downward pointing. This is because our constraint to arrange triangles on the top pulls the triangle node towards top border. Therefore, lets reduce the weight of the constant factor which controls this energy function. After reducing the factor value, simulated annealing generated the following layout. 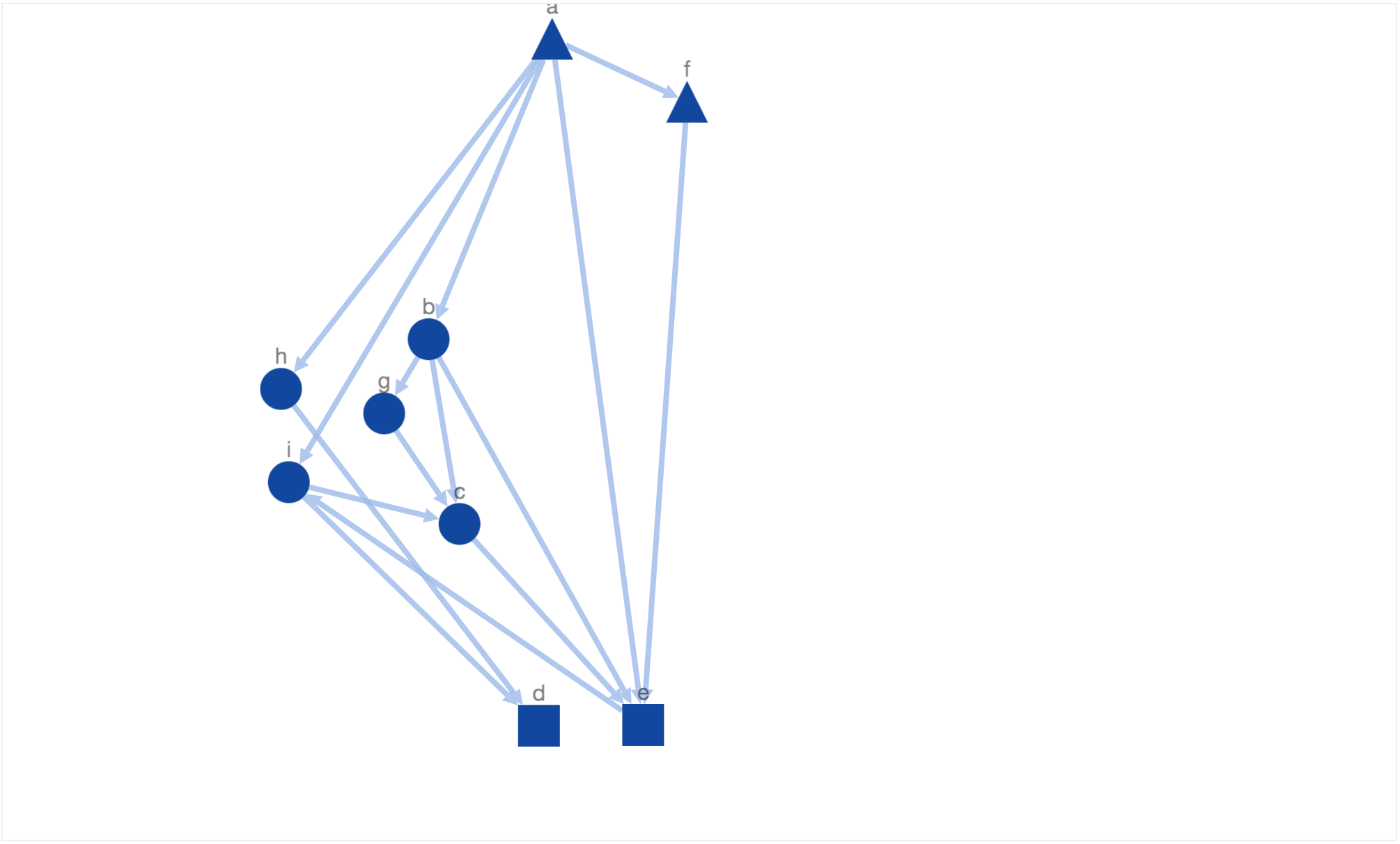 Another solution generated by simulated annealing! 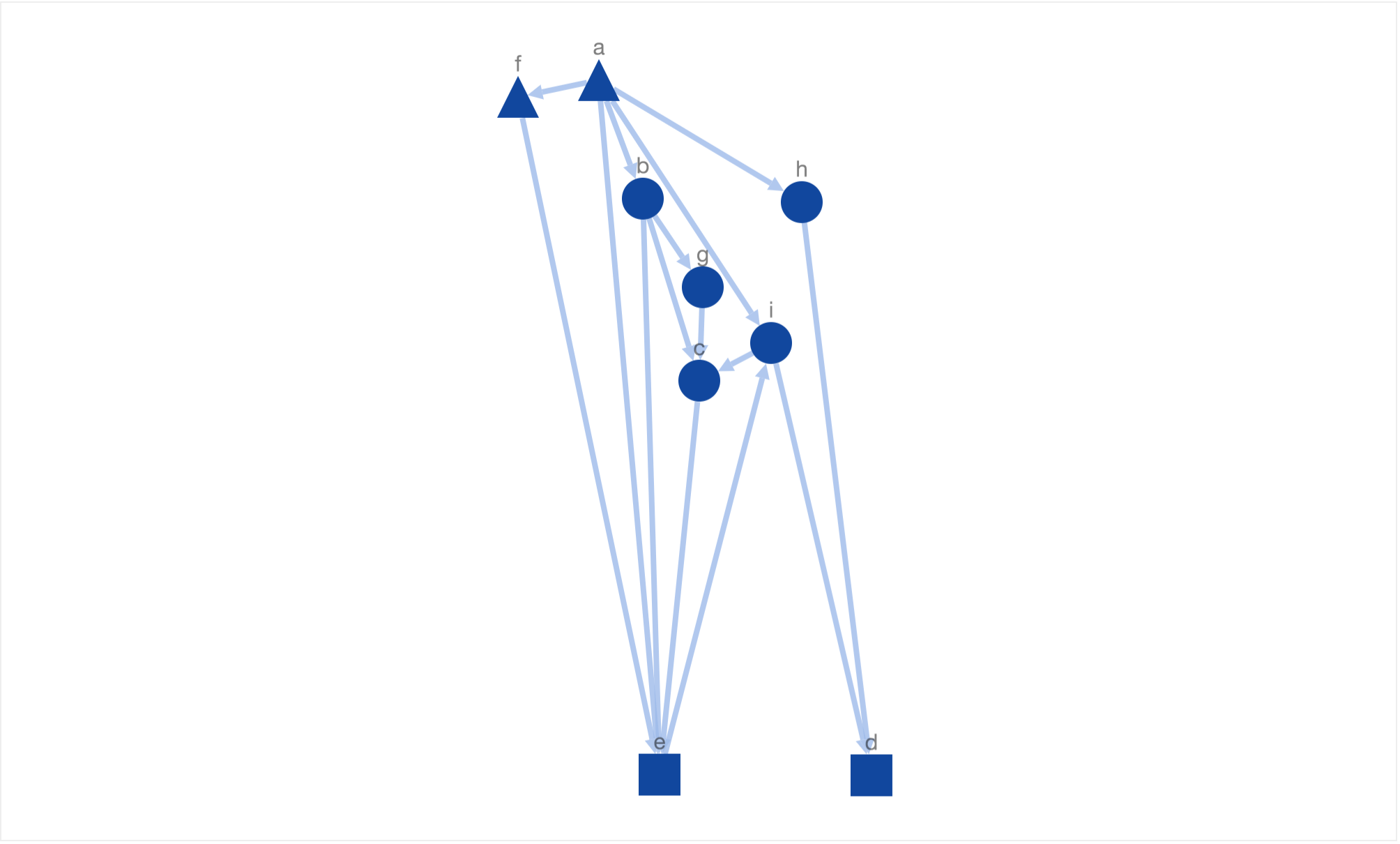 In both of these solutions it is easy to identify the actual information flow using the generated graph layout. Overall, the layout is not only “nicely” drawn but also mimics the underlying biological information.

The code for the above examples can be found here. You can also interact and play with the different energy function and their weights using the simulated annealing playground app.

If you want to learn how to use cytoscape.js-simulated-annealing layout extension, please refer to this page.